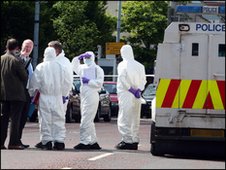 A 40-year-old man has been arrested in connection with the murder of a man on Belfast's Shankill Road.

Bobby Moffett, 43, was shot in the face shortly before 1300 BST on Friday.

The police said Mr Moffett, had strong links to the Ulster Volunteer Force, and was well known in loyalist circles.

Dawn Purvis, leader of the Progressive Unionist Party which is linked to the UVF, said there would be consequences for the paramilitary group if it was behind the killing.

"This could have broader implications in terms of the ceasefire and decommissioning."

The UVF said last June it had put all its weapons beyond use.

He died in hospital. Police do not believe the shooting was sectarian.

There is speculation that Mr Moffett may have been involved in a fight with a member of the UVF in recent days – but this may have been a personal dispute rather than anything to do with the organisation.

The attack happened in an area that was crowded with shoppers.

In a statement, the police said it was "a cold-blooded, ruthless killing".

"It is a chilling reminder of a violent past that everyone in the community hoped we had left behind," they added.

The gunmen were seen running off along nearby Conway Street.

One witness said: "I heard about four shots and saw the gunmen standing in the middle of the road wearing balaclavas and orange tops.

He said he saw the victim lying on the ground.

"I think he was shot in the head or the face," he said.