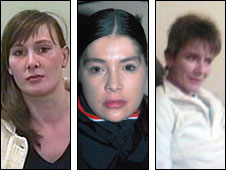 The three women all worked as prostitutes in Bradford

Officers investigating the deaths of three women in Bradford have recovered what are thought to be human remains in the River Aire.

The discovery was made at about 1200 BST about 200 yards from where the remains of Susan Blamires were found, West Yorkshire Police said.

Officers said it was too early to speculate who the remains belonged to.