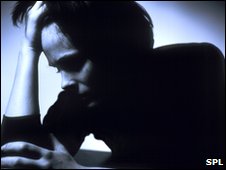 The effect was seen in men and women

Comparing your income with those of family and friends is a recipe for unhappiness, a study has suggested.

Researchers analysing data from a Europe-wide survey found three-quarters of those asked thought it important to compare their incomes with others.

But those who compared salaries seem less content, especially if they looked at those of friends and family rather than work colleagues.

The paper in the Economic Journal also found the poor were most affected.

The researchers, from the Paris School of Economics, used data from the European Social Survey covering 19,000 participants in 24 countries.

They found that those who compared their incomes with others tended to be less happy.

We need to know what comes first – is it those who are glass half empty types who do the comparisons as a consequence of that, or is it the comparison that makes them unhappy?

The responses showed that the greater the importance people attached to such comparisons, the lower they ranked themselves on measures of satisfaction with life and standard of living, as well as on feeling depressed.

There was no difference seen between men and women in how much they compare their income with those around them.

The researchers suggest that when it comes to comparing your salary with colleagues' earnings, it may help boost feelings about the prospects for potential future income.

They concluded: "Constantly looking over one's shoulder seems to make the world a less happy – and more unequal – place."

"I had thought that richer people would compare more because if you're down towards the bottom what really matters is just getting the minimum required, but it didn't come out that way."

Professor Cary Cooper, an expert in organisational psychology and health at Lancaster University Management School, said the kind of people who constantly compare themselves with others tend to be unsure of themselves.

"We need to know what comes first – is it those who are glass half empty types who do the comparisons as a consequence of that, or is it the comparison that makes them unhappy?"

He said comparisons with school and university friends were probably most damaging.

"With work colleagues it's a fairness issue, but with school friends who had the same opportunities as you you might think 'They've done much better than me so I must be less competent'.

"I would advise people to not compare themselves and be happy with who they are and the situation they're in – remember those you're comparing yourself with may not actually be more content."