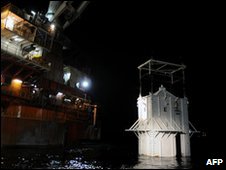 Work is continuing to lower a giant funnel onto the bed of the Gulf of Mexico in an attempt to contain oil gushing from leaks in a blown-out well.

A crane is lowering the 90-tonne device, which is hoped to be operational by Monday.

Earlier, oil from the massive slick started washing ashore on an island chain off the coast of Louisiana.

Pelicans and other birds were found covered in oil on the uninhabited Chandeleur Islands – the second oldest national wildlife refuge in the US and home to countless endangered birds.

A federal maritime agency said there was "oiling all over" the islands.

An estimated 200,000 gallons of oil a day has been leaking unstopped for 18 days from the well, 50 miles (80km) off Louisiana, since an explosion destroyed the Deepwater Horizon rig last month, killing 11 workers.

Although the rig was operated by Transocean, it was leased by the British oil giant, BP, which has taken charge of the clean-up process.

It said it hoped the gigantic concrete and steel containment device, once operational, would contain about 85% of the oil leaking out.

The technology has been used a few times in shallow waters, but never at such extreme depths and under such high pressure.

There is also a chance that the device could damage the well and make the leak worse.

Other risks include the drill-pipe becoming clogged with ice, and explosions when separating the mix of oil, gas and water on the surface.

On Thursday, the US Coast Guard confirmed for the first time oil had made its way past protective booms and was washing up on land. 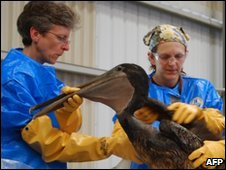 Heavier concentrations of crude remain further offshore, and the Coast Guard said weather forecasts suggested it would stay there until the weekend.

BP said emergency teams had been sent to Freemason Island, a favourite fishing spot for recreational anglers some 30 miles (50km) off Louisiana’s coast, to deploy inflatable booms to protect its prime marshland.

Fears are growing that sea life has been severely affected in the area, which includes vital spawning grounds for fish, shrimp and crabs.