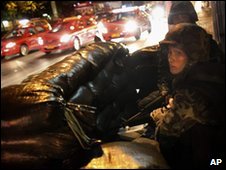 A Thai policeman has been killed and another wounded in a drive-by shooting in the capital, Bangkok, police say.

The attack occurred in the Silom financial district, close to the area where red-shirt opposition protesters have been barricaded.

A number of blasts in the same area later wounded another four policemen.

The violence came as a two-month-long stand-off continued with protesters rejecting a government offer to dissolve parliament in September.

The offer of elections on 14 November was made earlier this week by Prime Minister Abhisit Vejjajiva.

However, red-shirt protesters say this is not the firm date they need before they will disband their protest camp.

Yellow-shirt leaders also dispute the government’s road-map and say the prime minister should resign if he cannot enforce the law against the red-shirts.

The government insists its November election bid is non-negotiable.

The policeman killed on Friday evening died in hospital after being shot in the stomach, spokesman Pongsapat Pongcharoen told AFP news agency.

He said one civilian was injured in the attack.

Police said the blasts later appeared to have been caused by grenades, but there is no confirmation.

"We have to seek co-operation from everybody to return Thailand to peace," he said.

But the red-shirts insisted they would not end the protest without that has left 28 people dead and about 1,000 injured.

"The red-shirts will stop our demonstrations when our people have a clear answer to what we demand and when our people are safe," protest leader Jatuporn Prompan told a news conference.