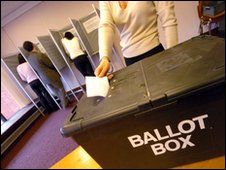 About 20 million electors will be voting in 164 council polls being held in England on Thursday, at the same time as the general election.

These include those for 32 London boroughs, 36 metropolitan authorities and 20 unitary authorties.

Five are already returned unopposed – two Tories at Cherwell and one at Daventry, one Labour at Hartlepool and an independent at Purbeck.

There are mayoral contests at Hackney, Lewisham, Newham and Watford where residents face a triple election on the same day – general, council and mayor.

When the seats being contested this year were last fought in 2006, a BBC survey put Tories 14% ahead.

The latest opinion polls suggest Labour has a chance of overall gains this year.

Polling stations are open between 0700 and 2200BST on Thursday.