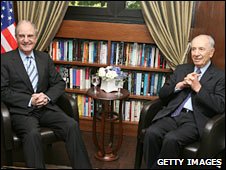 He will then go to Ramallah to see Palestinian leader Mahmoud Abbas.

Washington has said it expects the so-called proximity talks in the next few days. Talks in March were delayed by a row over building in East Jerusalem.

The talks have been stalled since 2008.

On Friday, President Peres told Mr Mitchell that Israel was committed to reaching a Middle East settlement, but stressed that the country’s security must be at the top of the agenda of any possible indirect talks.

Later on Friday, Mr Mitchell will meet Mr Lieberman and also Israeli opposition leader Tzipi Livni. He will then go to the West Bank to hold separate talks with Mr Abbas.

The US envoy, who arrived in the region on Wednesday, has already seen Israeli Prime Minister Benjamin Netanyahu twice.

Palestinian leaders want the backing of the Palestine Liberation Organisation (PLO), due to meet on Saturday, before committing to the indirect talks.

After the Arab League backed Palestinian participation in the talks last Saturday, Mr Abbas said he did not "want to lose hope".

The Palestinians pulled out of talks in March after an announcement that Israel had approved plans for new homes in the East Jerusalem settlement of Ramat Shlomo during a visit to Israel by US Vice-President Joe Biden.

The Palestinian Authority’s formal position is that it will not enter direct talks unless Israel completely halts building in the West Bank and East Jerusalem.

In November, Israel announced a 10-month suspension of new building in the West Bank, under heavy US pressure.

But it considers areas within the Jerusalem municipality as its territory and thus not subject to the restrictions.

Israel has occupied the West Bank, including East Jerusalem, since 1967. It insists Jerusalem will remain its undivided capital, although Palestinians want to establish their capital in the east of the city.

Nearly half a million Jews live in more than 100 settlements in the West Bank, among a Palestinian population of about 2.5 million.

The settlements are illegal under international law, although Israel disputes this.