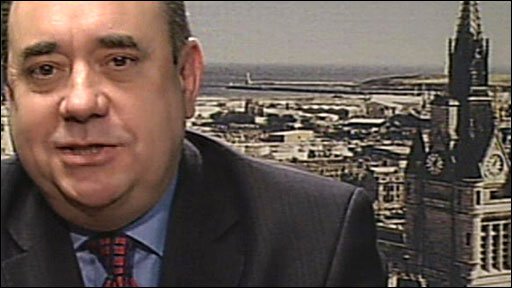 The Scottish National Party has ruled out a deal with the Conservatives in a new Westminster administration.

First Minister Alex Salmond told the BBC’s Jeremy Paxman that he was right to say there was "no chance" of the SNP entering any pact with the Tories.

Labour has made an approach to the nationalists and Mr Salmond said he had accepted Gordon Brown’s offer of "civil service support".

The SNP maintained it would not enter a coalition with any Westminster party.

The BBC understands that there has been Cabinet level contact between the Scottish National Party and the Labour Party to discuss talks about the formation of a new government.

The SNP has not had similar discussions with either the Liberal Democrats or the Conservatives.

Speaking to Jeremy Paxman on BBC One Mr Salmond said: "Fate seems to have dealt us a mighty hand, between ourselves and Plaid Cymru.

"As I understand it, on the projections we have at the present moment, certainly there would have to be some involvement of the SNP and Plaid Cymru if you were to get and construct an alternative government scenario.

"So for that reason, I’m accepting the offer of the Prime Minister on behalf of the SNP and Plaid Cymru to have the civil service backup to have discussions to see what the possibilities are in terms of defending the interests of Scotland and Wales in this parliamentary situation."

The Tories have failed to make a much-needed election breakthrough in Scotland, as the Labour Party’s vote held up north of the border.

Labour won 41 out of 58 seats, while the Tories ended up with just one MP, David Mundell.

Elsewhere, the SNP failed to reach its 20-seat target, while the Lib Dems also fell short in key target seats.

The last Scottish seat to declare, Argyll and Bute, has been held by the Liberal Democrats.