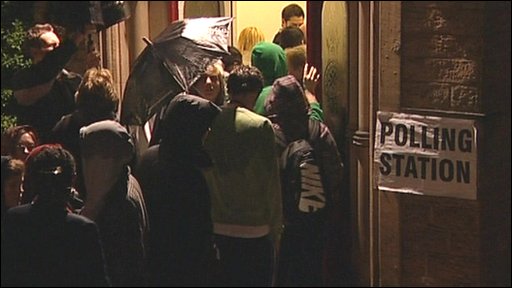 Hundreds of voters have been turned away and police called to deal with queues as people struggled to vote before polls closed at 2200 BST.

Turnout was predicted to be higher than recent elections, including 2005.

Voters were left "fuming" when they were turned away in Manchester, there were three-hour queues in Sheffield and ballot papers ran out in Liverpool.

The Electoral Commission announced a "thorough review" in constituencies where people were unable to vote.

Chair Jenny Watson said the law may well need to be changed, and some constituencies may find they would be subject to electoral petitions.

The law say poll doors must close at 2200 and no ballot papers are issued after that time, although everyone who has a ballot paper by then must be able to vote.

• Police were called to a polling station in Lewisham, southwhere around 300 people had yet to vote by 2200 BST.

• In Hackney, London, angry would-be voters staged a sit-in when polls closed. Voters were also due to elect local councillors and the borough’s mayor.

• In hisSheffield Hallamconstituency, Liberal Democrat leader Nick Clegg went to offer his apologies to frustrated voters at a polling station in Ranmore after they queued for more than three hours. Labour’s candidate, Jack Scott, said he was angry people may have been denied the chance to cast their vote. Former Hillsborough MP Helen Jackson said it left any close results open to legal challenge.

• Doors were closed on 200 potential voters inLadybarn in Withington, Manchester.

• InLiverpool,voters were left waiting when one polling station ran out of ballot papers.

• Voters were turned away amid long queues inBirmingham.

• Long queues were reported at two polling stations in Newcastle.

A spokesman for Gordon Brown said the prime minister was "very concerned" about the reports of people being turned away from polling stations and "would support a thorough investigation into them".

The Conservatives said reports of the queues were "disturbing" and must be "thoroughly investigated".

BBC political editor Nick Robinson said: "What a tragedy that, after a campaign which engaged and energised many who were previously cynical about politics, tonight’s story may be being over-shadowed by the extraordinary revelation that Britain cannot competently run the most basic part of the democratic process."

Many voters contacted the BBC to say they had been denied the chance to vote because the polls closed while they were still queuing.

Kathy Murray, from Manchester, said: "I’m fuming. I queued for over and hour and had the doors shut on me."

The Electoral Commission said each returning officer decided the number of polling stations in their constituency and the number of electors allocated to each station.

"There should have been sufficient resources allocated to ensure that everyone who wished to vote was able to do so," a statement said.

Were you turned away from or did you face long queues at your polling station? Send us your comments and pictures.

Send your pictures and videos to [email protected] or text them to 61124. If you have a large file you can upload here.