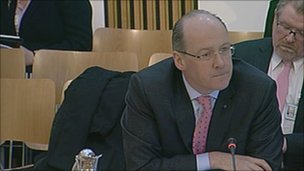 Scotland’s Finance Secretary John Swinney will confront his critics later in the row over his decision to allow Holyrood’s tax-varying powers to lapse.

Opposition parties are angry that Mr Swinney decided to abandon the Scottish Parliament’s power to raise or lower tax by 3p in the pound.

They also accused him of a “cover-up” after the “Tartan tax” decision was taken without consulting parliament.

Mr Swinney will insist that he acted in the best interests of Scotland.

The public voted for the Scottish Parliament to have tax-varying powers in a specific question which was part of the 1997 referendum on devolution, but the power has never been used by any administration.

It emerged last week that the Scottish government had declined to pay £7m to HM Revenue and Customs (HMRC) to upgrade their IT systems.

This meant the ability to use the Scottish Variable Rate (SVR) had lapsed and it now could not be made available for at least another two years.

He said: “Mr Swinney will robustly defend his actions at a time of spending restraint and indicate that the tax system he inherited three years ago was not in good shape – implying that the previous Labour/Liberal Democrat Scottish Executive had slipped up.

TAX RAISING POWERSTax varying powers agreement set up in 1999Start-up costs of £12mThe power has not yet been used£50,000 annual maintenance costsCurrent SNP government stopped maintenance payments in 2007HMRC confirmed in 2007 it was planning an IT upgradeRead more on Brian Taylor’s blog

“But it is thought there may also be a note of contrition, perhaps a recognition that parliament’s finance committee should have been briefed.”

In his budget statement at Holyrood last week, Mr Swinney specifically ruled out use of the power to raise revenue, leading to opposition claims that he misled parliament.

It subsequently emerged that the SNP administration had refused to pay an annual £50,000 fee for the SVR to be maintained since they took power in 2007.

And in August this year Mr Swinney told HMRC he was not going to pay £7m to upgrade the computer system which would allow the tax-varying power to be activated.

Labour finance spokesman Andy Kerr said of the finance secretary: “The facts are that he misled parliament in successive budgets by keeping this decision a secret.

“His refusal to provide straight answers to straight questions or offer any regret is beginning to make his position look very difficult.”

Scottish Liberal Democrat leader Tavish Scott said: “I expect a full apology from the Scottish government, both for abandoning the tax-varying power and the subsequent cover-up.”

Scottish Conservative finance spokesman Derek Brownlee said: “Most of all he needs to give a convincing explanation as to why he and his SNP government kept the facts secret and hidden from the finance committee, the Scottish Parliament, and the Scottish people.”