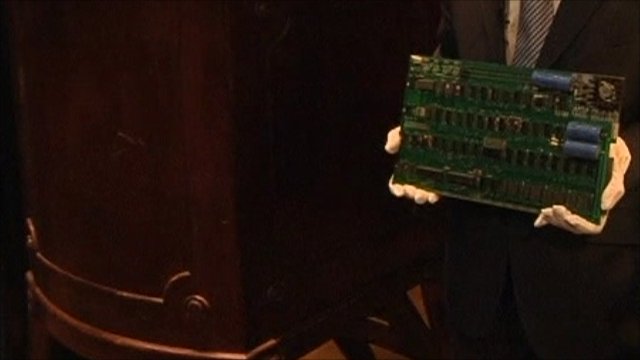 Steve Wozniak, who designed and built the machine, attended the sale

The Apple I came with its original packaging and a signed sales letter from Apple co-founder and current chief executive Steve Jobs.

It was bought over the phone at Christie’s by Italian businessman and private collector Marco Boglione.

Francesco Boglione, who was at the auction house on Tuesday, said his brother had bid for the piece of technology history “because he loves computers”.

Another of Apple’s co-founders, Steve Wozniak, who was also present and agreed to add an autographed letter to the lot, said: “I’m very delighted for the gentleman who purchased it.”

Francesco Boglione said it was likely that the Apple I – also known as the Apple 1 – would be returned to working order before joining a collection of Apple computers.

Christie’s said the Apple I had been the only personal computer to come with a fully assembled motherboard when it was introduced, making it ready to use straight from the box.

However, the user needed to provide a keyboard, power supply and display.

Also up for auction at Christie’s were papers published by World War II codebreaker Alan Turing, but they failed to sell, raising hopes they could be kept in the UK.

The Manchester University scientist created a machine at Bletchley Park to crack messages in the German Enigma code.

The failure to reach a reserve price means a campaign to raise funds to buy the papers for the Bletchley Park Trust for public display in the UK will continue.