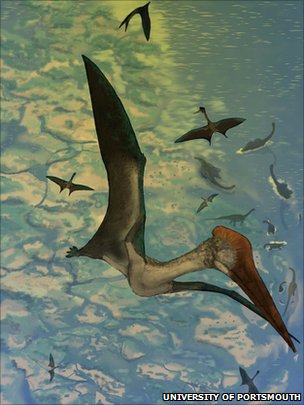 The conclusions are drawn from the first detailed aerodynamic study of the wings, which suggests they did not evolve to fly fast and powerfully in stormy winds.

The research, published in the Proceedings of the Royal Society, may also explain how the creatures were able to become the largest flying animals ever known.

By landing slowly, the pterosaurs could avoid injury and grow to much larger sizes than modern day birds. However, the trade-off for their large size was a vulnerability to strong winds.

Also known as pterodactyls, these creatures lived at the time of the dinosaurs. Some species are thought to have had wingspans of up to 10m.

Although there is a wealth of information about the bones of these creatures – no one really knows how they flew.

But a fresh look at the problem by a 62 year-old former engineer in Bristol working on a PhD thesis suggests that they glided gently on tropical breezes, soared by hillsides and coastlines and floated on thermal air currents.

Colin Palmer had a simple idea that hadn’t occurred to more eminent palaeontologists: To build models of pterosaur wings and put them into a wind tunnel.

“I come at this as an engineer rather than a palaeontologist,” Mr Palmer told BBC News.

“Palaeontologists have done amazing work in understanding the anatomy of these animals and that gave me a huge amount of data to build on. But as an engineer and experimentalist my first reaction was I want to do some (modelling) and find out what’s going on.”

The results from the PhD study have been so impressive that they been published in one of the Royal Society’s prestigious scientific journals.

The front edge of the Pterosaur wing is bone. Mr Palmer found in his wind tunnel experiments that that this caused drag making it aerodynamically less efficient than the wings of birds – which use feathers to create a smoother leading edge.

Mr Palmer reasoned that pterosaurs flew in a slow, controlled way, in particular when they came in to land. That would be important to pterosaurs because they had very thin bones which, according to Mr Palmer, could break on landing. 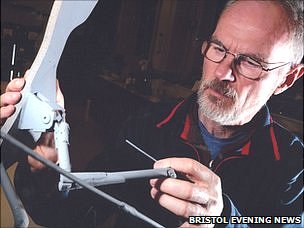 Colin Palmer brought an engineering perspective to the pterosaur problem

“If you are a pterosaur coming into land the last thing you want to do is bump into a rock so you want to land slowly and under control”.

It’s thought that these creatures controlled their flight by adjusting the curvature of their wings,. This enabled them to generate lift and so fly under control at lower speeds.

The wind tunnel results show that pterosaur wings were able to provide them with the soft landing that their large, fragile bodies needed.

Some palaeontologists had suggested that pterosaurs might have flown like modern day albatrosses which fly very fast and efficiently in strong winds.

Albatrosses make use of a technique called dynamic soaring where they make use of the strong winds and wind gradients in the southern ocean. In order to do that you have to fly very fast and very efficiently – neither of which pterosaurs were capable, according to the wind tunnel data.

Instead it shows they were much better adapted to flying in at gentle breezes of the tropics and using the lift you get from rising air currents as they come from the sea on to the land and also the thermal lift you get in tropical areas.

The nearest present day analogy in birds is frigate birds in the tropics make use of thermal lift over the sea.

Mr Palmer commented: “Since the bones of pterosaurs were thin-walled and thus highly susceptible to impact damage, the low-speed landing capability would have made an important contribution to avoiding injury and so helped to enable pterosaurs to attain much larger sizes than extant birds.

“The trade-off would have been an extreme vulnerability to strong winds and turbulence, both in flight and on the ground, like that experienced by modern-day paragliders.”

Mr Palmer says he’s surprised and pleased that his first time effort at academic research has been a hit.

“I work with a really good bunch of people who have given me the confidence to come to this late in life. It’s very exciting for me.

“It’s just a different approach. And I think this cross disciplinary work is very important because it brings in new insights based on new perspectives.”