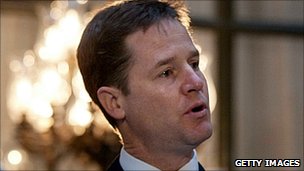 The cause of “progressive” politics need not be set back by public spending cuts, Nick Clegg is to say, arguing the divide between him and Ed Miliband on how to make society fairer is widening.

He will accuse Labour’s leader of “outdated” views on tax, spending and how best to reduce inequality.

Helping the poorest at a time of austerity by protecting the NHS and schools spending is right, he will say.

Labour say coalition cuts are reckless and will hit the vulnerable hardest.

In a speech in London, the deputy prime minister will claim it is possible for the government to tackle poverty and promote fairness despite its planned £81bn budget cuts over the next four years.

“Certainly the crisis in the public finances means making some hard choices,” he will say in the Hugo Young memorial lecture.

“But it also forces us to be clearer about what it really means to be progressive. With less money, we need more focus.”

Mr Clegg will say he agrees with Mr Miliband – who announced a major internal policy review on Monday – that the UK is an unequal society and that for too many children the barriers preventing them from fulfilling their ambitions seem higher than ever.

But he will say he disagrees with Labour’s solutions for tacking inequality, saying they are stuck-in-the-past and too wedded to state action.

“They are becoming the conservatives of British politics, defending outdated approaches rather than looking forwards to a new progressive future”

“The need to make choices is revealing an important divide in progressive politics,” he will argue.

“Labour risk being on the wrong side of this divide. They are becoming the conservatives of British politics, defending outdated approaches rather than looking forwards to a new progressive future.”

The impact of deficit-reduction measures announced in June’s Budget and October’s Spending Review – including a rise in VAT rise and £18bn in welfare cuts – continue to be hotly contested, with the Institute for Fiscal Studies saying they are broadly regressive in their effect on different income groups.

But Mr Clegg will argue that those focused on “income-based snapshots” are ignoring the wider picture and the benefits that decisions such as protecting NHS spending, boost funding for early-years education and to invest in schools in the most deprived areas will have on the poorest families.

Labour say policies such as abolishing educational maintenance allowances and raising tuition fees, which the Lib Dems previously vowed to oppose, will make it harder for poorer children to get on in life.

But Mr Clegg will argue that, while it was in office, Labour pursued a narrow, target-driven approach to tackling inequality focused on “shifting money around rather than shifting life chances”.

Many Lib Dem MPs have said the party needs to keep its options open in the run-up to the next election and should not rule out working with Labour in the event of another hung Parliament.

But Mr Clegg will claim Labour is struggling to engage with the new style of politics embodied by the coalition with the Conservatives – which is “working with integrity”.

“Labour is in danger of being left behind, of becoming stuck in an anti-pluralist rut,” he will add.

“When we practice plural, coalition policies, they cry foul. If you see every compromise as a betrayal, you will never understand plural politics and will certainly never be able to engage in it.”