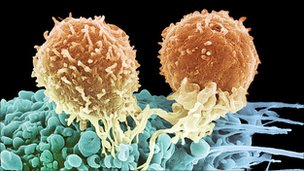 Scientists have developed a technique to estimate the age of a suspect from blood left at a crime scene.

Experts say the profiling method could be put to immediate use by forensic scientists where age information can provide investigative leads.

The technique exploits a characteristic of immune cells carried in the blood known as T cells.

The work by a team in the Netherlands has been published in the journal Current Biology.

As part of the process these cells use to recognise these invaders, small circular DNA molecules are produced.

The number of these circular DNA molecules – known as signal joint TCR excision circles (sjTRECs) – declines at a constant rate with age.

Writing in Current Biology, the researchers said they had shown that this biological phenomenon could be used for estimating the age of a human individual “accurately and reliably”.

The approach enables scientists to estimate a person’s age, give or take nine years, the researchers report.

This would allow individuals to be placed into generational categories spanning about 20 years.

Predicting human “phenotypes” – a person’s outward traits such as hair colour or eye colour – from DNA information is a newly emerging field in forensics.

But only a few phenotypic traits can currently be identified from DNA information with enough accuracy to have practical applications.

Lead author Manfred Kayser of the Erasmus MC University Medical Center Rotterdam said his test currently had the highest accuracy of any designed to estimate a “phenotypic” human trait from DNA information.

“Hence, every forensic lab is confronted with cases where the DNA profile obtained from the evidence material does not match that of any known suspect tested, nor anybody in the criminal DNA database.

“In such cases, it is expected that appearance information estimated from evidence material will help in finding unknown persons.”