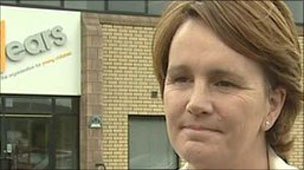 Caitriona Ruane made a written statement to the assembly

The education minister has announced she is investigating two school building contracts.

In the South Eastern board area, a potential fraud investigation is under way into the installation of second-hand parts in a heating plant at a Downpatrick school.

The contract is believed to be at De La Salle High school.

At the North Eastern board, there is an investigation into the contract for a new Magherafelt High school.

In a written statement to the assembly, Caitriona Ruane, said that during the procurement of a new building for Magherafelt High School, an arrangement was entered into with the contractor “without all the necessary approvals being in place with the department”.

She also said the board had made payment for work at the school, which included an element which had “not been approved by the department”.

Ms Ruane also referred to “serious concerns” around procurement practices in the South Eastern Education and Library Board (SEELB) area.

She said a file had been passed to the police regarding a “suspected fraud concerning the installation of a heating plant in a post-primary school”.

Ms Ruane said irregularities had also been identified in relation to the operation of a measured term contract for maintenance work in the SEELB.

She said she had commissioned a comprehensive investigation into the operation of the contract and wider procurement practice in the board.

In a statement, the SEELB said that it was “working closely” with the department to explore the “ramifications of a specific instance of suspected fraud, which involved a sum of under £7,000”.

“This ongoing work led by the Department of Education’s internal audit unit is focusing mainly on checking whether correct procedures have been followed in a range of other procurement actions in the same general area of activity over a number of years,” it said.

“The further review announced by the minister today will build on this work.

“It will give both the department and the board a clearer indication of what steps may need to be taken to improve our procurement processes and capacity.”

The board said it “fully shared” the department’s view that all procurement activities should be undertaken on the basis of the “highest possible professional standards”.

It said it would be co-operating with the review “to identify as soon as possible any further steps that may be necessary”.

The North Eastern Education and Library Board (NEELB) said it would also “co-operate fully” with the investigation of “all the circumstances around the procurement and work associated with the contract for Magherafelt High School.”

“The board has already conducted an internal enquiry into the circumstances of this contract and has made a detailed report available to the Department of Education and the Northern Ireland Audit Office,” it said.

“At all times, the board has endeavoured to work closely with its partners in the project to create a much needed secondary school to serve not only the town of Magherafelt, but also the whole district including Maghera where the secondary school has closed.

“The board, as always, has carried out its work in a spirit of openness and with integrity.”