Work is beginning in Israel on a barrier along the border with Egypt, aimed at stemming the flow of illegal immigrants into the country.

The barrier, including an electric fence and surveillance technology, will run for 250km (155 miles).

Egyptian officials insist they only shoot at the border after those crossing ignore repeated orders to stop, and point out that human-trafficking gangs carry guns.

However, the United Nations and human rights groups have asked Egypt to stop excessive force being used.

The Israeli defence ministry said on Sunday that “dozens of heavy engineering vehicles will be deployed at points along the Israeli-Egypt border” on Monday.

The Israeli government approved the construction of the barrier in March, after months of planning and preparatory work.

Prime Minister Benjamin Netanyahu has described the influx of illegal migrants across the border as a major threat to “the Jewish and democratic character of the state of Israel”. 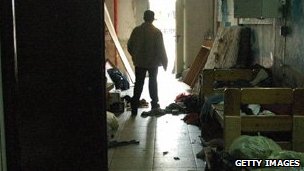 Many African migrants try to sneak into Israel to escape poverty

The Israeli immigration authority said in a report earlier this month that some 700 illegal migrants – a record number – infiltrated through the Egypt-Israel border on a weekly basis, Israel’s Haaretz newspaper says.

This marked an increase of about 300% since the start of 2010, according to the report, which put the number of migrants at 10,858 over the January-November period.

A deal struck between Libya and Italy in 2009 has cut off a popular sea route to Europe for illegal African migrants and helped direct the flow towards Israel, the BBC’s Yolande Knell in Cairo says.

Our correspondent adds that many African migrants believe that Israel is currently offering better work opportunities and more Western standards.