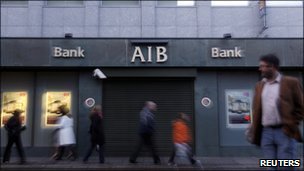 Ireland has agreed up to 90bn euros of EU-led loans

The junior partner in the Irish Republic’s governing coalition has urged a general election in January, after a European Union-led bailout of the country’s ailing economy.

The government on Sunday agreed up to 90bn euros (£77bn; $124bn) of EU-led loans and will publish a four-year budget plan on Wednesday.

It also faces a by-election on Thursday which may cut its three-seat majority.

Green Party leader John Gormley, the environment minister, said he wanted the election to be held in the second half of January.

The Green Party said the election should only be held after the 2011 budget had been unveiled and passed.

“Leaving the country without a government while these matters are unresolved would be very damaging and would breach our duty of care,” the party said in a statement.

Mr Gormley said: “The past week has been a traumatic one for the Irish electorate. People feel misled and betrayed.

“But we have now reached a point where the Irish people need political certainty to take them beyond the coming two months.”