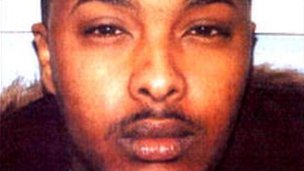 Mohammed Musa Mohamoud was murdered in Butetown, Cardiff, in April, 2003

A 27-year-old man extradited from Canada to the UK is due to appear in court on suspicion of murdering a man in Cardiff seven years ago.

The man was arrested in Canada in July and was extradited last Friday. South Wales Police officers accompanied him from Canada to Heathrow Airport.

He will appear before Cardiff magistrates’ court.

The court is sitting at Cardiff Crown Court while refurbishment of the magistrates’ court takes place.

A South Wales Police spokesperson said Mr Mahoud’s family had been informed and were being supported by a police family liaison officer.