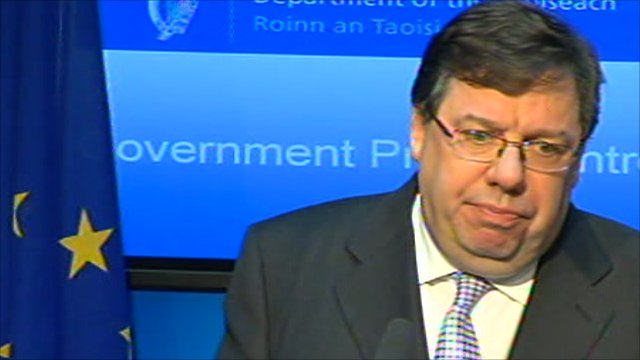 Irish PM Brian Cowen: “We are now in a position to apply for assistance”

The euro and global shares have both risen in value, as markets welcomed the bail-out for the Irish Republic.

Following Sunday’s deal, the euro strengthened to $1.376 while Japan’s Nikkei index closed up 0.9% at a five-month high.

The exact amount and terms of the European Union-led package will be negotiated in the coming days.

The UK and Sweden have also offered direct loans.

The crisis in the Irish Republic has been brought on by the recession and the almost total collapse of the country’s banks, analysts say.

Once known as the Celtic Tiger for its strong economic growth – helped by low corporate tax rates – a property bubble burst, leaving the country’s banks with huge liabilities and pushing up the cost of borrowing for them and the government.

The Irish Prime Minister, Brian Cowen, said the government would be publishing a four-year budget plan that would restructure the banking industry.

EU Finance Commissioner Olli Rehn, speaking in Brussels, said the loans would be provided to the Republic over a three-year period and the assistance would help preserve the stability of the eurozone – the group of 16 nations using the euro as their common currency.

There was a real sense of urgency as eurozone finance ministers held a conference call trying to agree as much of this as they could before the markets open on Monday.

What was driving all of this was the fear of contagion – that Ireland’s problem could spread to other eurozone countries such as Portugal, force up borrowing costs and perhaps force them to accept a bail-out as well.

The big question now is that there have been two eurozone bail-outs this year: Will this help draw a line under instability or are we going to see a succession of crises, raising long-term questions about the future of stability in the EU?

Mr Cowen said the Irish Republic’s banks would be made smaller, as part of a restructuring of the banking industry.

The other part of the bail-out package would help to reduce the government’s budget deficit to a target of 3% of GDP by 2014, Mr Lenihan said.

Under the bail-out scheme, income tax will increase but the country’s low 12.5% corporation tax – controversial for some other countries but “non-negotiable” for the Irish government – will not be touched.

It is a sign of the crisis facing the Irish Republic and some of the other highly-indebted European nations that the rescue plan had to be announced late on Sunday, before the financial markets opened on Monday, without many important details having been worked out, says BBC Europe correspondent Jonty Bloom.

“We should not underestimate the scale of our economic problems, but we must have faith in our ability as a people to recover and prosper once more”

“To the Irish people I say simply this: We should not underestimate the scale of our economic problems, but we must have faith in our ability as a people to recover and prosper once more,” he said.

“The task of rebuilding our economy falls to our own efforts as a people,” he told a news conference following a cabinet meeting on the rescue plan.

“That is where the focus of our efforts must turn over coming weeks, beginning with the four-year plan and then the budget. And now we need to show the solidarity in our own country that our neighbours have shown to us at this time.”

Although the country’s government claims to be fully funded until the middle of next year, it has provided a blanket guarantee to the Irish banks, some of whom are now finding it impossible to borrow money in the markets.

On Thursday, Mr Cowen’s government admitted for the first time that it may need outside help.

Previously the government had said it did not need any financial support from the European Union and IMF.

EU officials fear the Republic’s financial problems might spread to other eurozone countries with large budget deficits, such as Spain and Portugal.

The EU and the IMF launched a 110bn euro rescue programme for Greece in May after the government was faced with the prospect of bankruptcy.