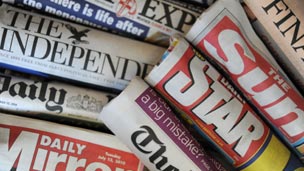 The Irish Republic’s bail-out woes attract the attention of plenty of Monday’s newspapers.

The Daily Mail has done the sums and puts a price on the package – £300 for every family in Britain, it claims.

The paper says saving the Irish economy will land UK taxpayers with an increase in the “colossal debt burden…”.

The Independent’s Mary Ann Sieghart considers what might have happened if Britain, like Ireland, had adopted the euro as its currency.

After a decade of interest rates too low for own our good, she says, the UK property market would have been further inflated, and, “like Ireland, we would now be close to national humiliation”.

The Daily Express says eurosceptics “should take pride in having helped to prevent our country from finding itself in the middle of a similar nightmare”.

Bill Emmott, in the Times, disagrees, saying that the euro had nothing to do with Ireland’s property boom and bust. He accuses eurosceptics predicting the end of the euro of “wishful thinking.”

Meanwhile, bankers will not have to reveal details of their huge bonuses after all, according to the Financial Times.

The papers says Chancellor George Osborne is likely to water down legislation that would compel banks to publish details of £1m-plus payments.

The call comes from Lib Dem MP and ex-chief secretary to the Treasury, David Laws – who has a book out this week about the formation of the coalition.

The Guardian claims that Operation Trident – the police unit set up to investigate violent crime in London’s black communities – may be disbanded because of government cuts.

The paper quotes an unnamed police source as saying that the unit could be merged with other crime squads.

And the Mirror and Sun tell of a boy who caught a thief by taking his photo and posting it on Twitter.

Alex Wilson, 10, saw the man snatch a phone from a pedestrian in the street.