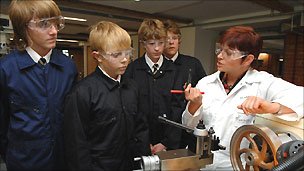 GCSEs should be taken at the age of 14 – after which pupils could specialise in academic or vocational courses, says a report for an education charity.

The Sutton Trust calls for a fundamental restructuring of upper secondary education in England.

With the school leaving age being raised to 18, report author Alan Smithers says GCSEs will no longer be relevant as end-of-school exams.

Prof Smithers calls for a system to replace the current “untidy mix”.

The report by Prof Smithers and Pamela Robinson of the University of Buckingham says that there should be a clearer divide in England between lower and upper secondary school.

It argues for GCSEs to be taken earlier – at the age of 14 – after which pupils could move on to different types of education, such as academic, vocational or technical courses.

At present in England’s schools, Prof Smithers says, there is a system in which a form of undeclared selection takes place.

Options are chosen at 14 and exams are taken at 16. This determines pupils’ future pathways but in a system which, he says, does not want to be seen as selective.

“We’ve got a bit of a hang-up about differentiating. It’s a hangover from the 11-plus,” says Prof Smithers.

He says it means that “selection is fudged so we don’t have clear pathways in the later years of schooling”.

In particular, he argues, it means that there is a lack of clear routes into technical and work-based training.

“Hence we have to import so many skilled workers from abroad,” he says.

Earlier this week, former education secretary Lord Baker also argued the merits of a transfer at the age of 14, the starting age for the university technical colleges which he is promoting.

These will be aimed at providing high-quality vocational training for teenagers.

The report for the Sutton Trust looked at how other countries structured secondary education and concluded that England needed to make a distinction between lower and upper secondary school, proposing that this boundary should be at the age of 14.

This will raise questions about how pupils would be selected for different paths at this age – with any admissions system likely to be controversial.

But Sir Peter Lampl, chairman of the Sutton Trust, said that “effectively we have differentiation by default: all too often children’s choices are dictated by the school they happen to be in, not their own talents and interests”.