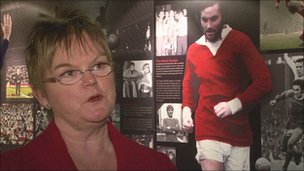 The sister of footballing legend George Best has said she was devastated that his medals had to be sold.

The Manchester United and Northern Ireland star’s 1968 European Cup winner’s medal and other pieces of memorabilia were auctioned last month.

Barbara McNally said the decision had been taken by the executor of Best’s will due to liabilities in his estate.

She said she received criticism over the auction – which raised £200,000 – including by Best’s son Calum.

“It was completely out of my control,” she said.

“I had no choice in the matter.”

The Belfast-born forward made 470 appearances for Manchester United between 1963 and 1974, scoring 179 goals.

The European Cup winner’s medal raised £156,000. It was presented to Best following Manchester United’s 4-1 victory over Benfica, a win which made it the first English team to win the European Cup.

Among the other items sold were a replica of the medal, which was made for Best by the Professional Footballers’ Association (PFA) when he misplaced the original. It raised £9,000.