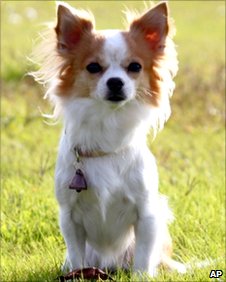 Momo will begin her rescue work in January

A chihuahua named Momo (Peach) has passed the exam to become a dog in the police force in western Japan, in what seems to be a first.

The 3kg (6.6lb) dog is set to become part of a search-and-rescue team used for disasters such as earthquakes.

Its small size means it will be able to squeeze into places too narrow for traditional rescue dogs, such as German Shepherds.

Chihuahuas, named after a Mexican state, are the smallest breed of dog.

“It’s quite rare for us to have a chihuahua work as a police dog,” said a police spokeswoman in Nara, western Japan.

“We would like it to work hard by taking advantage of its small size.”