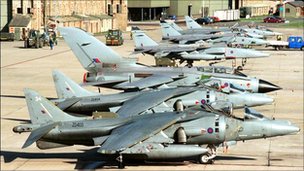 About 1,200 people are employed at RAF Leuchars in Fife

The Ministry of Defence has said that no decision has been made regarding the future of RAF Leuchars in Fife.

The comment comes amid reports that the airbase, which employs 1,200 people, could close to save a base in Moray.

Last month it was announced that RAF Kinloss in Moray would shut after ministers cancelled orders for the new Nimrod MRA4 surveillance aircraft.

The future of neighbouring RAF Lossiemouth is unclear. The closures stem from the strategic defence review.

In a statement, the MoD said: “The strategic defence and security review means that Kinloss and two other bases will not be required by the RAF.

“No decisions have been made on which bases or on any future use.”

The uncertainty about RAF Leuchars in Fife comes after reports in the Scotsman newspaper suggesting the base could be “sacrificed” to save RAF Lossiemouth.

Sir Menzies Campbell, who represents North East Fife, said RAF Leuchars was “vital” for the defence of the UK.

He said: “Well I know that the Ministry of Defence is conducting a wholesale review.

“But when it comes to Leuchars, the strategic case for the retention of Leuchars is absolutely overwhelming.

“Not least because it has just received the first of the three typhoon squadrons that was promised to it.”

Sir Ming said £40m had already been spent on the base preparing for the arrival of the typhoons.

He added: “The runway’s been resurfaced and there is no strategic case in my view of any kind whatsoever for taking Leuchars away from doing its job, which is to protect the airspace of the northern half of the United Kingdom. And it does that on a regular basis.”

He added: “Scotland has already lost one airbase to the Tory-Liberal government and there is no case to lose another.”

Westminster SNP leader and Moray MP, Angus Robertson said the review was nothing but a “finance driven sham”.

A final decision on the future of the bases is due to be announced early next year.