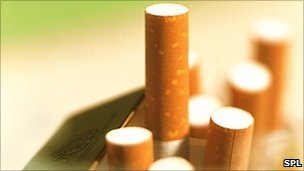 The government is currently planning to ask retailers to cover up their displays of cigarettes from next year to protect children.

But now cigarette packets could also be made a standard colour like grey, rather than the existing bright colours.

Campaign group ASH says this is “an enormous leap forward”.

The Department of Health is considering the idea of asking tobacco firms to put only basic information and health or picture warnings on their packets.

Making the cigarette packets a plain colour would protect children from taking up smoking in the first place, it suggests.

It would also help support people who are trying to give up smoking, the department said.

Health Secretary Andrew Lansley, said it was time to try a new approach.

“The industry use packaging to seduce our kids and mislead smokers”

“The evidence is clear that packaging helps to recruit smokers, so it makes sense to consider having less attractive packaging. It’s wrong that children are being attracted to smoke by glitzy designs on packets.

“We would prefer it if people did not smoke and adults will still be able to buy cigarettes, but children should be protected from the start.

“The levels of poor health and deaths from smoking are still far too high, and the cost to the NHS and the economy is vast. That money could be used to educate our children and treat cancer,” Mr Lansley said.

“We will shortly set out a radical new approach to public health in a White Paper.”

Martin Dockrell, director of policy and research at ASH, (Action on Smoking and Health), said the industry calls packaging “the silent salesman”.

“By helping smokers who want to quit and protecting our children from the tobacco ad men this will be an enormous leap forward for public health, perhaps even bigger than the smoking ban,” he said.

“The government accepts that packaging and tobacco displays influence young people, so there is no time to waste. It may take years to pass a new law on plain packs but the law on tobacco displays is already on the statute books and comes into force next year.”

Recent research published in Tobacco Control showed that putting tobacco out of sight in shops not only changes young people’s attitude to smoking, it also doesn’t result in retailers losing money.