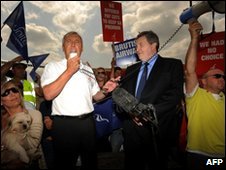 Talks between British Airways and its cabin crew union Unite will resume later as the current industrial action enters its fifth and final day.

The two sides are locked in a row over pay, work conditions and travel perks.

Hundreds of flights have been cancelled because of the five-day walk-out though BA says it is flying 70% of passengers.

The current round of negotiations are being held in a secret location after talks at the weekend had to be halted when protesters stormed the building.

If no deal is agreed, further five-day strikes are due to begin on Sunday, 30 May and Saturday, 5 June.

Unite has said it will call off the industrial action if the airline restores travel concessions to staff who previously went on strike.