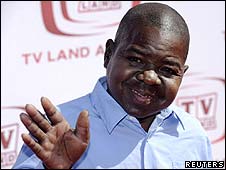 Former Diff'rent Strokes star Gary Coleman is said to be in a critical condition in hospital after reportedly injuring his head.

A spokeswoman for Utah Valley Regional Medical Center said the 42-year-old was admitted to the hospital on Wednesday but revealed no further details.

According to People magazine, this is the third time Coleman has been hospitalised this year.

The actor has had a series of financial and legal problems in recent years.

Coleman played Arnold Jackson in Diff'rent Strokes from 1978 to 1986, famously coining the catchphrase "What you talking 'bout, Willis?"

Coleman's family released a statement on Thursday saying he has been taken to the hospital with "a serious medical problem".

They said they hoped the actor "will be able to recover and return home soon".