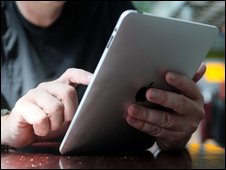 Two versions of the iPad are available

The Apple iPad tablet computer is going on sale in the UK, after one million were sold in the first 28 days after its launch in the US.

Some Apple stores will open an hour earlier, at 0800 BST, to allow fans to get their hands on the device.

But there are warnings that some customers who pre-ordered the device in order to get it in the post on its UK launch date may be disappointed.

This is because shipping dates for the computer have slipped.

Apple has already delayed the international launch of the iPad citing strong demand in the US since its launch on 3 April.

Despite the success, some have criticised the iPad saying it was a closed system that limited what people could do with the books, magazines, music and video they enjoy.

Customers outside the US have been able to place pre-orders for the touch-screen device since 10 May.

While those that placed orders immediately are likely to get them, others may face a longer wait. Apple's estimates for shipping dates are now mid-June.

There are also reports that some who placed an early pre-order had got their UK iPad a day ahead of its officieal release.

Some bigger Apple stores are set to open at 0800 on 28 May in anticipation of extra sales.

"There will be some stock on the shelves," said Stuart Miles of gadget site Pocket Lint. "But it's likely that it will only last for tomorrow."

Two versions of the iPad are available. One only uses wi-fi to connect to the net and the other uses both wi-fi and the 3G mobile technology.

In the UK mobile phone providers Vodafone, Orange, O2 and 3 have revealed details of the price plans for the 3G version. This will require a separate micro-Sim card in order to connect to the net. Existing mobile phone Sims will not work in the iPad.

Mr Miles said he had been using his wi-fi-only US iPad for about a month.

"It's an emotional luxury product," he said. "One that you do not need but once you have it you will find ways to use it."

He agreed that many of the things the iPad offers can be done on other gadgets such as phones and laptops.

"Most of the people in the world do not interact with content, they just consume it," he said. "It's a great device for consuming content but not great for creating it."

The tablet-device is also starting to see competition from other devices such as the Dell Streak and many others.