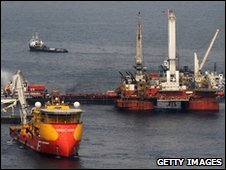 BP has resumed pumping mud into the leaking oil well in the Gulf of Mexico after briefly suspending the high-risk "top kill" procedure.

The oil giant said it was too early to say whether the latest attempt to stem the leak had been successful.

It has emerged that far more oil has poured from the well than was previously thought, which would make this the biggest spill in US history.

US President Barack Obama is to visit the affected area in Louisiana.

Mr Obama has defended his government's handling of the huge oil spill. Speaking at the White House, the president vowed to hold BP accountable for the "horrific disaster".

He unveiled a series of measures, including a continued moratorium on drilling permits for six months.

The move comes after an opinion poll said 60% of Americans were unhappy with the government's response.

BP suspended its "top kill" procedure, untested at this depth, for several hours on Thursday so it could monitor progress.

It has now resumed pumping heavy mud into the ruptured well

It says it believes the procedure can work – although it may not know for days yet.

It would take 24-48 hours before BP engineers could tell whether "top kill" had worked, company officials said at about 2000 GMT on Thursday.

If the procedure succeeds, cement will be injected to seal the well.

New estimates from a panel of US scientists said at least 12,000 barrels (504,000 gallons) were leaking into the Gulf every day, far exceeding the 1989 Exxon Valdez disaster.

The leak was caused by an explosion on the Deepwater Horizon rig on 20 April, which also killed 11 workers.

President Obama stressed that his administration, and not BP, was in charge.

But he admitted the government did not have the technology to deal with the damaged oil well nearly a mile (1.6km) below the surface, meaning that Washington must rely on BP to plug the ruptured well.

The president's comments came as questions were increasingly being asked about whether he had been sufficiently engaged in handling the disaster, says the BBC's Adam Brookes in Washington. 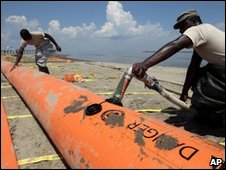 In a shake-up of the offshore oil industry, Mr Obama suspended test drilling on 33 rigs in the Gulf of Mexico, as well as halting exploratory deepwater drilling for another six months.

In addition, he cancelled the sale of some offshore leases off the coasts of Alaska and Virginia.

Correspondents say the move marks a shift in policy since March, when President Obama gave the go-ahead to widen the scope for offshore drilling in order to reduce dependency on oil imports.

Elizabeth Birnbaum and the MMS have come under fire from lawmakers over lax oversight of drilling operations.

The president blasted the "scandalously close relationship" between oil companies and regulators, and said officials granting exploration permits would no longer be responsible as well for ensuring safety.

US officials warned the coming hurricane season could be one of the worst on record.

Are you in the region affected by the oil? What is your reaction to the apparently successful attempt to stem the flow of oil and gas? You can send us your views and experiences Click here to add comments..