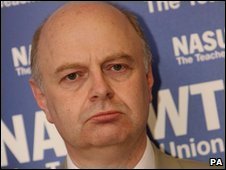 Harvey was found not guilty of attempted murder

A science teacher who attacked a 14-year-old pupil with a dumbbell has been sacked from his job, a union has said.

Peter Harvey, 50, was given a two-year community order on Monday at Nottingham Crown Court .

He had admitted attacking the boy at All Saints' Roman Catholic School in Mansfield.

He was provoked by pupils during a lesson in July 2009, who called him names including "psycho".

The court heard how Harvey lost control and hit the boy about the head with the 3kg weight while shouting "die, die, die".

The teacher, who was signed off with depression for several months, was found not guilty of attempted murder at a trial.

However, he had pleaded guilty to grievous bodily harm without intent.

Following the sentencing, his union, the NASUWT, said it hoped the school's governors and Nottinghamshire County Council would allow the married father-of-two to retire on the grounds of ill health.

However, on Thursday the union said he was sacked.

In a statement, the union said: "It is with deep regret that the NASUWT has to announce that the governors of All Saints RC School in Mansfield, Nottinghamshire, have today summarily dismissed Peter Harvey from his post at the school."