World stock markets put in some strong rises on Thursday, boosted by supportive comments from China on the strength of the euro. 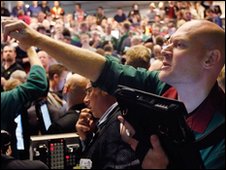 The agency that manages the country's huge foreign assets said it was not rethinking its holdings in euros.

That led to a positive day's trading and left shares in all key markets with good gains.

By lunchtime in New York, the Dow Jones was more than 2.2% higher.

Reports that China was reviewing its investments in the light of the weakness in the eurozone gave markets a fright late on Wednesday.

The make-up of China's estimated overseas assets of $2.5 trillion are a state secret.

Although most of them are in US dollars, a significant proportion – estimated at $630bn (Ã‚£438bn) – are thought to be held in euros.

A sell-off from China would not only highlight the fragility of the eurozone, but also depress the market by increasing supply at a time of low demand.

Earlier on Thursday, Japan's main market also closed with a gain – of 1.2%.