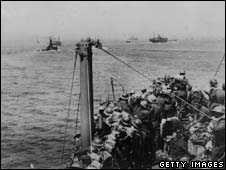 A fleet of "Little Ships" which rescued Allied troops from Dunkirk in 1940 are to set sail from the South Coast to mark the 70th anniversary of the event.

The flotilla of around 60 vessels will sail to France to commemorate Operation Dynamo, the evacuation of some 338,000 soldiers from the beaches of Dunkirk.

The troops had been driven back to the coast by the German army.

The phrase "Dunkirk spirit" has become emblematic of British determination and courage in the face of adversity.

The evacuation took place between 26 May and 4 June 1940, and involved 900 naval and civilian craft which were sent across the Channel under RAF protection.

Among them were the "Little Boats" – including fishing vessels, pleasure crafts, paddle steamers and lifeboats.

During the evacuation – described by Winston Churchill as a "miracle of deliverance" – the Luftwaffe attacked whenever the weather allowed and at least 5,000 soldiers were killed.

Seventy years on, some 60 craft have gathered in Ramsgate, in Kent, and are due to set sail for Dunkirk, in north-east France, at 0700 BST, weather permitting.

They will be escorted by the Royal Navy frigate HMS Monmouth.

Ramsgate’s Royal Harbour Marina was the reception centre for returning troops and after a weekend of commemorative events in France, the Little Ships are due to return there on Monday. 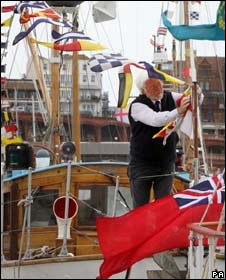 Edwin Brown, who was among those rescued in 1940, told the BBC: "They made a hell of a difference because they got us out to the bigger boats where we could get some help from the sailors who couldn’t get in because of the depth of the water."

Of that famous British pluck, Mr Brown said: "There isn’t a better spirit anywhere because everyone was looking after each other.

"If you were in trouble and you needed help, it was there. That was the Dunkirk spirit."

A commemorative ceremony will be held at the Allied memorial on Dunkirk beach on Saturday. There will be a minute’s silence, followed by the national anthems of Britain, the Czech Republic, France and Belgium.

The evacuation was a big boost to British morale.

World War II historian Nick Hewitt said it "bought time" for the Allies, allowing them to regroup and fight another day.

"Without Dunkirk, Britain doesn’t have an army and it’s extremely questionable whether Britain could have fought the war," he said.