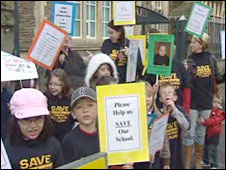 Protesters have objected to plans to close some primary schools

Plans by Cardiff council to expand Welsh-medium education in the west of the city have been rejected by the Welsh Assembly Government.

It means a plan to remove surplus English-medium places in Canton to meet increased demand for Welsh-medium schools cannot go ahead.

Council leader Rodney Berman said: "This is going to send shockwaves among the schools community in Cardiff."

An assembly government spokesman said they were unable to comment currently.

The decison to reject the plan was taken by First Minister Carwyn Jones, and is likely to prove highly controversial.

The council said it was "dismayed at receiving a decision from the Welsh Assembly Government that it has rejected the proposal to close Lansdowne Primary School and relocate Ysgol Treganna onto the Lansdowne site as a two-form entry primary school with nursery".

The local authority had wanted to make the change as part of a shake-up of schools following public consultation.

The council said it would have meant Radnor Primary School "becoming established as a two-form entry English-medium primary school with nursery on the site it currently shares with Ysgol Treganna".

In April last year, the council's executive backed a plan to close Lansdowne Primary to make way for the expansion of Welsh-medium school Ysgol Treganna, which is short of space.

Parents mounted a strong campaign to save the school, claiming the closure would simply move the problem elsewhere, leaving English-medium schools in Canton without enough room.