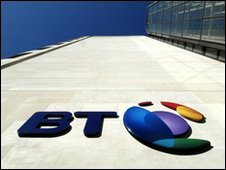 A Carmarthenshire pensioner says BT has quoted her more than Ã‚£150,000 to install broadband to her home.

Beverley McCartney, who lives in Salem, near Llandeilo, has wanted a broadband connection for years.

BT had previously told her they were not able to connect broadband but sent a letter last week saying they could.

Mrs McCartney said: "I just laughed, I thought it was ludicrous in view of their profits.

"I phoned BT and said surely this is a typing error and the girl said 'No, there's been no mistake, other people have had bills for much more than this.'"

Mrs McCartney said that BT had told her on separate occasions that there would be no charge for the connection and also that one could not be made. 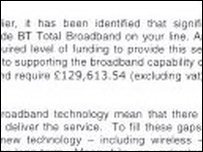 She said: "Clearly the departments don't speak to each other and don't consult each other over the engineering cost.

"It's outrageous. I can only laugh otherwise I'd probably burst into tears."

Chris Orum, BT press officer for Wales, said: "There can be very rare cases where additional charges need to be applied because of an exceptional amount of work required to the network in order to provide service.

"These charges reflect the additional line plant and equipment needed to provide broadband to a particular location.

"BT is making a multi billion pound investment in its UK network and is continuing to work with the Welsh Assembly Government to find solutions for the relatively few areas in Wales still unable to access a broadband service."

"If it's just one individual person and it requires upgrading the network for one person, no company would cover that."

However, he said Salem, the village where Mrs McCartney lives, is not a 'not-spot'.

Mrs McCartney said: "I live three miles out of Llandeilo but there's 50 odd houses in Salem and I'm quite sure they'd like broadband too."

"I'm not on top of a mountain in the middle of nowhere. It's rural but not a wildnerness.