Talks aimed at solving the BA cabin crew dispute have been adjourned.

The airline's chief executive Willie Walsh met the joint leaders of the Unite union, which represents BA cabin crew, in a new bid to reach agreement.

The two sides held talks for over six hours and they are expected to resume negotiations on Friday. Earlier, Unite joint leader Tony Woodley said "it will not be easy" to reach a settlement.

A total of 246 flights in and out of Heathrow were cancelled on Wednesday.

On Tuesday, more than 200 flights were cancelled, though BA maintained that it was meeting its target of flying 70% of passengers to their destinations.

BA said it was increasing its flight schedule for Unite's next threatened five-day strike, which – should no deal emerge from this latest set of negotiatons – is due to start on Monday. 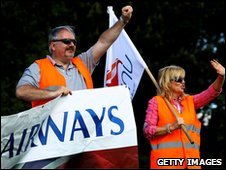 The next five-day strike is due to start on Monday

The carrier said throughout this strike it would be operating more than 70% of long-haul flights from Heathrow and more than 55% of short-haul flights.

Mr Woodley said Saturday's meeting was the first time that he "genuinely thought there was a bit of effort going in to settle this".

He also called for BA to restore travel concessions to workers who had previously gone on strike.

BA's chief executive Willie Walsh has previously expressed his frustration that agreements reached with Unite's leadership have been rejected by the Bassa arm of the union, which directly represents BA cabin crew.

As well as the new talks, BA has warned it is planning for a full hearing on the legality of the strike, despite a court ruling in favour of Unite last week.