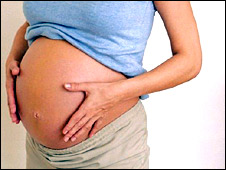 Maternity staff are being warned about standards

Midwives and other staff involved in delivering babies are being warned about leaving swabs inside the vaginas of women who have just given birth.

The National Patient Safety Agency has issued an alert across England and Wales urging staff to take more care.

The watchdog has received reports of 99 cases where the swabs have been left inside women over the past two years.

While this is a small fraction of the 500,000 births a year, the NPSA said it still wanted to improve standards.

Swabs are commonly used after vaginal birth where there is bleeding.

But if left inside the vagina they can cause infection.

The NPSA said NHS trusts should improve the way it records and counts swab use so errors are picked up.

Sara Johnson, head of maternity care at the NPSA, said: "This guidance is necessary as the effects of infection and the psychological harm assocaited with these incidents can be significant and last beyond the immediate postnatal period."