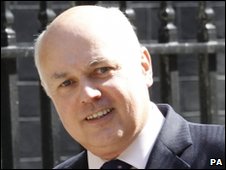 The government is to lay out its plans for what it calls a "root and branch reform" of Britain’s welfare system.

Work and Pensions Secretary Iain Duncan Smith will argue the coalition’s main priority is to get people on long-term benefits back into employment.

He told the Guardian the government had a "once-in-a-generation" opportunity to reform the welfare system.

Ministers plan to create one welfare to work programme and make benefits more conditional on willingness to work.

Mr Duncan Smith, brought back into frontline politics by Prime Minister David Cameron, has spent several years in opposition preparing a blueprint for the future of the welfare state.

The former Conservative Party leader is now responsible for pushing the government’s Welfare Reform Bill – announced in Tuesday’s Queen’s Speech – through Parliament over the next few months.

Of most concern to the new government is the rise in the number of inactive people of working age claiming benefits.

The BBC’s Home Affairs Correspondent Tom Symonds said its proposals will include forcing the unemployed to sign up for welfare-to-work training schemes sooner than is currently required.

Ministers want the long-term unemployed facing "the most serious barriers to work" to sign up to work and training programmes immediately and for those under 25 to get support within six months.

They also want to speed up the assessment of all those on incapacity benefit – paid to those unable to work due to health problems. All those deemed able to work are likely to be moved onto jobseeker’s allowance.

Mr Duncan Smith told the Guardian that the welfare system discouraged many of the five million people who are on benefits from working.

He said those moved off incapacity benefit would be offered "intensive" support to find work and that all of the changes would be enacted "carefully and sensitively".

Labour sought to increase incentives to work and introduce penalties for those unwilling to do so but the Conservatives said reforms must go further and faster to tackle the problem of long-term unemployment, which they say underpins many of the country’s most deep-seated social problems.

During the campaign, the Tories called for a sliding scale of sanctions for those on benefits who turned down work.

As in all policy areas, the government’s welfare agenda is having to reflect compromises reached between the Conservatives and the Lib Dems in their coalition agreement.

The proposals are also likely to include paying welfare-to-work providers on a results-basis, loans to help unemployed people set up their own businesses and local work clubs where people out of work can share skills and make contacts.

The government may also say how it intends to end what it claims is a system that penalises those on benefits should they try to get a low-paid job.

As part of the changes, a new cabinet committee will be set up to co-ordinate the strategy between different government departments.

In his interview, Mr Duncan-Smith hinted that he was prepared to reach out to sympathetic figures in the Labour Party to try and build a consensus over the reforms.

"Lots of different hard-headed politicians have come into this job saying they’re going to do something different and walked out with the bills of social failure still rising," he said.

"I’m determined that we take this once-in-a-generation chance to tie two parties together, and possibly elements of the third, to get the job done."