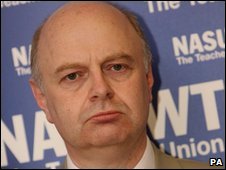 A teacher who attacked a 14-year-old pupil with a dumbbell has been given a two-year community order.

Peter Harvey, 50, who hit the boy at All Saints’ Roman Catholic School, Mansfield, in July 2009, pleaded guilty to grievous bodily harm without intent.

The boy, a known troublemaker at the school, suffered a fractured skull.

The science teacher, who was signed off with depression for several months, was found not guilty of attempted murder at a trial at Nottingham Crown Court.

The court heard he had been mocked by pupils moments before the attack and had shouted "die, die, die" as he bludgeoned the boy with the weight after the pupil swore at him.

It emerged during the four-day trial that pupils at the school were trying to wind up Harvey so his reaction could be caught on a camcorder being used secretly by a girl in the class.

The footage was then to be passed around the school as a way of "humiliating" the teacher.

His lawyer argued Harvey was in such a state when he battered the boy that he could not have possibly intended to kill or seriously harm him.

Judge Michael Stokes QC said after the trial: "Common sense has prevailed now we have heard all the evidence."