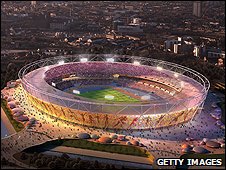 The government has announced that £27m is to be cut from the 2012 London Olympic budget.

The decision is part of the £6.2bn of savings in public spending announced by the Conservative-Liberal Democrat coalition on Monday.

The cutback affects the Olympic Delivery Authority (ODA), which is the body building the venues.

The previous Labour government had said the £9.325bn budget for the 2012 Games in east London was ring-fenced.

Jeremy Hunt, the secretary of state for culture, media and sport, told the bodies the savings should not interrupt the Olympic programme and that "frontline services" should be protected.

The main savings should come from cutting administration costs and restrictions on recruitment and pay.

ODA chairman John Armitt said he was sure the savings could be made without affecting the programme.

He said: "Due to strong financial management and cost control to date, the project is on a sound economic footing and I am confident that the ODA will be able to save £27m from our budget this year.

"This saving will be found by continuing to make efficiencies in the way the project is delivered as we have already done in the past.

"This is possible due to the efficient way that the project has been managed.

"Our regular budget updates have consistently shown that we are on schedule and within budget with savings of around £600m already delivered to keep us on track."