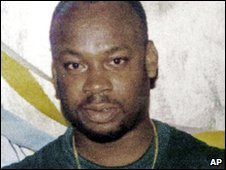 A state of emergency has been declared in parts of the Jamaican capital, Kingston, after police were attacked by armed gangs trying to prevent the arrest of an alleged druglord.

Two police stations were shot at and a third set on fire by suspected supporters of Christopher "Dudus" Coke.

The Jamaican government agreed to extradite him to the US last week.

But his supporters have set up barricades and said they will fight to protect him.

The BBC’s Nick Davis in Kingston says troops and police have come under fire, and smoke is rising from the burning police station.

The state of emergency covers the West Kingston and St Andrews districts of the capital, where the violence broke out, and will last at least a month, the government said.

The areas are a stronghold of support for Mr Coke, 41, who says he is a community leader.

The US Justice Department says he is one of the world’s most dangerous drug barons. He is accused of leading a gang called the Shower Posse and operating an international smuggling network.

The gang has also been blamed for numerous murders in Jamaica and the US.

Jamaican Prime Minister Bruce Golding said earlier this week that he was prepared to send Mr Coke to the US on drugs and weapons trafficking charges.

The decision reversed nine months of opposition to his extradition.

Mr Golding had argued that the evidence against Mr Coke was obtained illegally by intercepting mobile telephone calls.

But he changed his mind in the face of growing public discontent, and questions about his possible ties to Mr Coke.

He apologised to the nation and admitted he had mishandled the case.

The US and UK have warned travellers about possible violence and disorder in Kingston because of the situation.