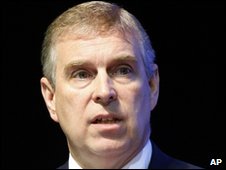 Prince Andrew has "categorically" denied knowing about a meeting in which his ex-wife allegedly offered a reporter access to him for cash.

Buckingham Palace said the Duke of York had carried out his role as a UK trade envoy with "complete and absolute propriety and integrity".

Sarah Ferguson has apologised for her "serious lack of judgement".

In a statement, the Duchess of York said she was "sincerely sorry" for her actions and admitted her financial situation was "under stress".

"I very deeply regret the situation and the embarrassment caused," she said. 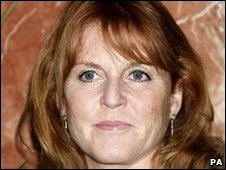 "It is true that my financial situation is under stress. However, that is no excuse for a serious lapse in judgement and I am very sorry that this has happened."

She confirmed the Duke of York "was not aware or involved in any of the discussions that occurred".

"The duke has made a significant contribution to his business role over the last 10 years and has always acted with complete integrity," she added.

And a Buckingham Palace spokesperson said: "The Duke of York categorically denies any knowledge of any meeting or conversation between the Duchess of York and the News of the World journalist.

"Since 2001 he has carried out his role of Special Representative with complete and absolute propriety and integrity."

The undercover reporter posed as an international business tycoon and filmed the duchess apparently agreeing a deal for an introduction to her former husband.

She also says the cash would "open up all the channels whatever you need, whatever you want, and then that’s what and then you meet Andrew and that’s fine.

"And that’s, that’s when you really open up whatever you want."

The duchess is heard explaining how the prince meets "the most amazing people" in his role as special representative, but she insisted he was "completely whiter than white".

BBC royal correspondent June Kelly said the duchess had made headlines before because of episodes in her private life but this was far more damaging because it called into question her character and integrity.

"Of course certain members of the Royal Family have never been in the Fergie camp and this will do nothing to endear her to them," she added.

Sarah Ferguson married Prince Andrew in 1986 and they have two daughters, Beatrice, born in 1988, and Eugenie, born in 1990.

Although they separated in 1992 and divorced in 1996, she and their daughters later moved back into a wing of the former marital home and maintain a close relationship with the Duke of York.

The duchess’s finances have been the subject of a number of negative headlines in recent years.

In September, her spokeswoman confirmed court action had been taken over unpaid bills.