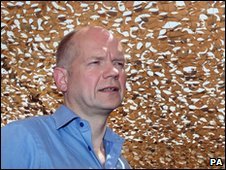 It would be "unwise" and "unhelpful" to set a firm date for withdrawal of UK troops from Afghanistan, Foreign Secretary William Hague has said.

Mr Hague said they should stay until Afghans can manage their own security, and being made to "jump through hoops" to meet a date would not help.

Three UK government ministers are in the country for talks with Afghan leaders and British military.

Their flight was diverted from Kandahar Airfield after the base was attacked.

"They should only be here for as long as we need to work towards that objective of Afghans being able to look after their own security.

"One of the things we’ve been having a lot of discussions about on this visit is how we can speed up the training of the Afghan security forces and encourage, wherever possible, Afghan forces to take responsibility themselves which they are increasingly able to do.

"But I don’t think setting a deadline helps anybody. I think so much of what we’re doing in Afghanistan, setting targets for people then to jump through hoops towards, doesn’t help them in their work."

Mr Hague is one of three Cabinet ministers from the coalition government visiting Afghanistan for talks with political and military leaders in the capital Kabul.

Mr Hague, Defence Secretary Liam Fox and International Development Secretary Andrew Mitchell spent Saturday in Kabul before flying down to Camp Bastion, where most of Britain’s 10,000-strong deployment is based.

The three ministers had planned to fly into Kandahar Airfield on Saturday night, but were forced to divert to Camp Bastion after the massive Nato base came under rocket attack from the Taliban.

While speaking to the Politics Show, Mr Hague also reiterated the government’s pledge to to double the operational allowance – which is about £2,600 per six-month tour – for those serving in the country.

He said the full details of the bonus would be made clear after next month’s budget.

The three ministers have also been determined to show there is "not a cigarette paper" between how each sees the purpose and strategy for Britain’s involvement in Afghanistan, after it appeared there were divisions between the approaches of Dr Fox and Mr Mitchell.

Dr Fox said on Saturday troops were there for UK security not for "the education policy in a broken 13th-century country"; while Mr Mitchell emphasised the importance of creating a stable society in Afghanistan.

The three men have since insisted the two approaches go hand in hand.

On Sunday Mr Mitchell denied there was any confusion within the new UK government about policy on Afghanistan.

He told the BBC that Britain’s objective was to stop Afghanistan becoming a source of terrorism, a mission that was not only about military success, he said, but also about trying to build the basics of a functioning state.

He said: "I think the fact that all three of us are here underlining this crucial link between defence, diplomacy and development, is extremely important."