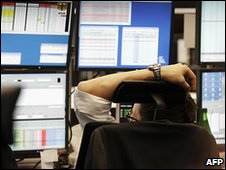 Foreign Secretary William Hague has said the euro is "in crisis" but it is not in the UK’s interest for countries to pull out of the single currency.

Mr Hague said the weakness of the euro, caused by the debt crisis across Europe, "vindicated" his warnings about the currency when he was Tory leader.

But he said he took no "comfort" from the current situation and nations must work hard to reduce their deficits.

David Cameron says it is in the UK’s interest for the euro to stabilise.

Speaking in Germany on Friday, the prime minister said financial stability in the eurozone – the UK’s largest trading partner – was vital, although he said he would oppose giving any extra powers to EU institutions to try and shore up the euro.

German Chancellor Angela Merkel has said the prospect of the debt crisis in Greece spreading across Europe has put the future of the euro at risk – although EU countries have agreed billions of pounds of rescue funding.

Mr Hague said "the language of crisis" was already present in efforts to deal with the worsening situation.

"We don’t want the euro to be in crisis.

"I am a long-standing opponent of the Britain joining the euro, but we don’t want the euro to collapse or countries to pull out of it because of course that kind of crisis is very bad for Britain and affects financial confidence across the board."

During the 2001 general election campaign – when he was Conservative leader – Mr Hague warned that Labour could take the UK into the euro and there were "24 hours left" to save the pound.

All of the three largest Westminster parties have ruled out joining the euro for the foreseeable future, and Mr Hague said history had shown that it would not have been right for the UK.

"I warned all those years ago that to create a ‘one size fits all’ currency… is a dangerous thing to do economically unless you are trying to create a single economic state.

"So I suppose that’s been vindicated in many ways but I don’t take any comfort from that."

He added: "This is a difficult situation for Europe.

"We will do what we can to help, but the most crucial thing is that countries with excessive debts and deficits bring them under control."