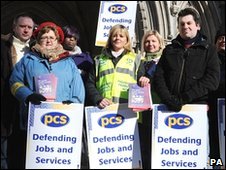 A union has won its High Court bid to halt government cost-cutting measures which threatened to reduce the level of redundancy pay for civil servants.

Lawyers for the Public and Commercial Services Union (PCS) argued changes made to the Civil Service Compensation Scheme without agreement were unlawful.

Mr Justice Sales ruled the union’s application for judicial review should succeed and the changes be quashed.

It follows a series of strikes across the UK, including one on Budget Day.

The union claimed the changes – which came into play on 1 April and removed or reduced payments based upon age and length of service – threatened to "rob" existing staff of up to a third of their redundancy entitlements – worth tens of thousands of pounds.

After the ruling in London, PCS solicitor Richard Arthur said: "If the government wants to alter rights which have been agreed for civil servants then it has to get the agreement of the unions.

PCS general secretary Mark Serwotka said the ruling was a "huge tribute" to union members who had faced some "disgraceful criticism from their employer and ministers" but "refused to sit back and watch their terms and conditions ripped up in front of their eyes".

"We have always accepted that changes are necessary but all we ever asked is that they were fair and protected those who have given loyal service.

"We will now be knocking on the door of the next government to remind ministers they are legally obliged to reach an agreement with us. If they do not meet their obligations, the union will have to consider further industrial and legal action," he said.

At a recent hearing at the High Court, Nigel Giffin QC, appearing for the PCS, said the union’s position was that changes had gone "too far in terms of their impact on existing staff".

Mr Giffin told Mr Justice Sales it was important not to lose sight of the fact the compensation scheme was "a significant part of the overall terms and conditions of employment of a civil servant".

He said the compensation scheme had been introduced by Parliament – under the 1972 Superannuation Act – to give statutory protection to civil servants who had already provided loyal service.

The legislation had given rise to a "legitimate expectation" that relevant terms of the scheme would not be altered without the consent of staff and their trade unions.

The changes introduced in April brought some transitional protection for those in post, but was limited in scope and duration and had not had union consent, he said.

The government had defended the legality of the amendments and pointed out it had reached agreement with other trade unions over the changes.