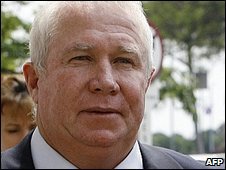 A Zimbabwean court has acquitted a leading politician, Roy Bennett, on charges of plotting to overthrow President Robert Mugabe.

The judge ruled that the prosecution failed to prove that its alleged link of Mr Bennett to a convicted arms dealer was genuine.

The case had threatened to split the country’s unity government of long-term rivals Mr Mugabe and Mr Tsvangirai.

Speaking outside the court in Harare, he told the BBC he was happy to be acquitted and now had the time and strength to move on.

"Good has triumphed over evil," he said.

The white farmer is a leading member of Mr Tsvangirai’s MDC (Movement for Democratic Change).

He was to have taken a position as deputy minister for agriculture in the government when he was arrested in February 2009.

"Having carefully considered the facts, I come to the conclusion that the state has failed to prove a prima facie case," said Judge Chinembiri Bhunu.

"The accused is accordingly found not guilty."

He said that the prosecutors’ key evidence – an alleged confession from arms dealer Peter Hitschmann – was inadmissible.

In earlier testimony to the court, Mr Hitschmann had said evidence he gave allegedly showing links to Mr Bennett had been extracted under torture.

Mr Bennett’s supporters, including the prime minister, had said the charges were politically motivated and aimed at undermining the coalition government.

A spokesman for the MDC has said the party will push for Mr Bennett to take up his ministerial position immediately.