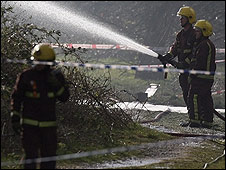 A man has died after a fire at a house in the village of Carrowdore on the Ards Peninsula in County Down.

The fire, at the house on Manse Road, was reported at 0400 BST on Monday morning.

The police have said that they are investigating the circumstances surrounding the fire and enquiries are ongoing.

Jonathan Bell, the area’s DUP MLA, said the victim was an elderly man and that the police have told him the fire is not suspicious.

He added: "Carrowdore is a close-knit, caring community and there is a tangible sense of shock here this morning."