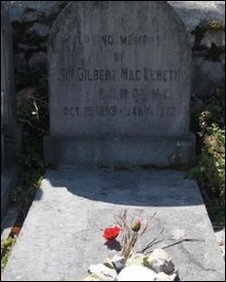 The Spanish grave of a British World War I hero has been saved after an appeal to trace his relatives.

Authorities were threatening to exhume the body of Sir Gilbert Mackereth, who is buried in a San Sebastian cemetery, because of unpaid taxes on the plot.

Terry Dean, of the Western Front Association, spoke about the Salford-born soldier to the BBC on Thursday and had traced his cousin by that evening.

Sir Gilbert, who commanded the 17th Battalion Lancashire Fusiliers, was awarded the Military Cross for his outstanding bravery during WWI.

In April 1917 he crawled into no man’s land in Saint Quentin in France to rescue a group of soldiers who were lost and in danger. He took control and saved them all.

Sir Gilbert’s wife died in 1979, 17 years after her husband. They did not have children. The couple had lived in Spain.

Mr Dean, who launched the search after being notified of the tax problem, said tracing a relative so soon was "beyond his expectations".

"On Thursday night I spoke on the phone to his first cousin John Sloane," he said.

Mr Sloane, who had no idea about the grave issue, accepted an offer from The Sun newspaper to get the tax paid.

"For the past three years I’ve been searching for a picture of Gilbert Mackereth in uniform and never in my wildest imagination did I expect to see the first photograph of him in The Sun," Mr Dean added.

Mr Dean, who laid a poppy and a note on Sir Gilbert’s grave last summer, was alerted to the eviction notice by a local resident.

He now hopes a memorial to Si Gilbert can be established at The Fusilier Museum in Bury, Greater Manchester.