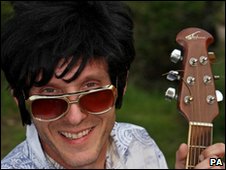 An Elvis Presley impersonator has been forced to abandon a world record singing attempt on medical advice.

Simon Goldsmith, of Little Bealings, Suffolk, planned to sing for more than 43 hours, 11 minutes and 11 seconds.

But the 36-year-old delivery driver was advised to stop after singing Elvis hits non-stop at a pub for 35 hours.

He began singing at 0800 BST on Friday at the White Lion pub in Lower Ufford and was raising £1,000 for St Elizabeth Hospice, Ipswich.

Mr Goldsmith, who performs under the name Harry Isaac Presley, made the world record attempt in memory of his father who died of cancer at the hospice last year.

The Guinness World Record was set by Thomas Gothje, from Germany, in 2004.