Hundreds of people have been denied the chance to vote after being turned away from polling stations across England.

Voters in London, Sheffield, Newcastle, Manchester and Birmingham were left queuing outside polling stations after they closed at 2200 BST.

There were angry scenes at several polling stations, with voters claiming they were understaffed.

The Electoral Commission said it would be investigating.

In Liverpool, voters were left waiting to vote at one polling station after it ran out of ballot papers.

Officials at the Dunbabin Road station in the Wavertree constituency had to send for more.

Three-hour queues were seen in Liberal Democrat leader Nick Clegg’s constituency of Sheffield Hallam, prompting him to apologise to voters.

Police were called to polling stations in Ranmoor and Woodseats in Sheffield to move voters who were refusing to leave. 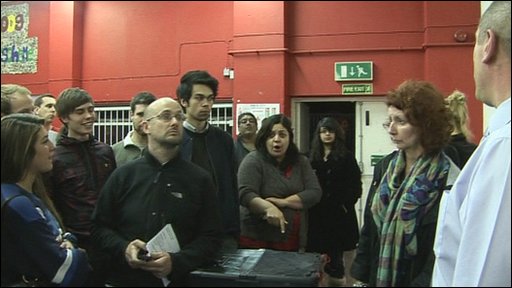 He said: "We got this wrong and I would like to apologise."

Mr Mothersole said the council was "caught out" by high turnouts.

Voters had to to be locked in some polling stations in Birmingham to control crowds after long queues formed.

At St Paul’s Church in the Jewellery Quarter, a number of voters were turned away.

Karl Wilkinson, who lives near the polling station, said queues were forming from 1800 BST with doors shutting promptly at 2200 BST.

He said: "It seems that Birmingham City Council has let us down once again by providing a facility that was wholly inadequate."

Amy Commander was turned away from the St Paul’s polling station at 2205 BST after joining the queue at 2115 BST.

She said: "The police were called to clear the polling station and deal with rightfully angry and shouting crowds." 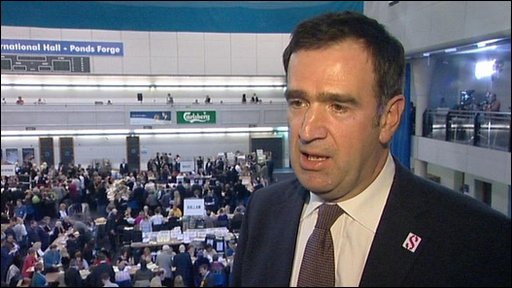 In London, a Metropolitan Police spokesman described queues of 300 "disappointed people" unable to vote in Lewisham and 150 in Hackney.

Andrew Boff, Conservative mayoral candidate in Hackney, said it was "getting ugly" after people were told they could not vote at a polling station with just three staff.

Voters at a Hackney polling station staged a sit-in protest at being unable to vote.

Asked whether it amounted to a "scandal", Minister for London Tessa Jowell replied: "I think it is. These are queues of people exercising their democratic right and then being denied it."

Georgia Ladbury visited her polling station in Vauxhall, south London, three times before being able to vote and said people were being turned away by 2200 BST.

She said: "It was not as if everyone turned up at 9.55pm expecting to vote.

"The station was definitely understaffed and that would seem to be the only explanation for the problems."

People were turned away from polling stations in parts of Surrey following a higher than expected turnout.

Voters in the constituency of Runnymede and Weybridge were unable to vote because of long queues.

The Electoral Commission said if people had been issued their ballot paper by 2200 BST they were still legally able to vote after that time.

It promised a "thorough review" of what had happened in constituencies where people were unable to vote.

Houghton and Sunderland South was the first to declare its results for the fifth general election in a row.

The constituency declared at 2252 BST. Labour’s Bridget Phillipson won the seat with 19,137 votes.

In Loughborough, Leicestershire, voters were forced to fill out their ballot paper in the back of an officer’s car after the polling station’s caretaker was late for work.

Early general election results suggest the Conservatives are on course to be the largest party in a hung Parliament.