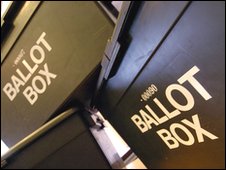 The polls have closed across Wales and the rest of the UK in probably the closest general election for decades.

Counting is beginning in 40 Welsh seats, with all results due overnight.

Labour, who have a notional 30 seats, will hope their support holds up, while Conservatives aim to snatch several seats from the government.

Liberal Democrats aim to add the likes of Newport East to their four seats, while Plaid Cymru have targeted Llanelli and Ceredigion.

According to a joint BBC/Sky/ITV exit poll, the Conservatives will fall 19 seats short of a Commons majority.

The exit poll was conducted at 130 polling stations across the UK by NOP and Mori.

All exit polls have a small margin of error which could be significant in a tight election such as this one, in which the three main Westminster parties have been so close in the opinion polls.

There could also be different voting patterns around the country.

In Wales, Conservatives are hoping to take Cardiff North and the Vale of Glamorgan from Labour.

They are also targeting key seats in north east Wales, from the Vale of Clwyd and Delyn to Clwyd South, constituencies which could indicate David Cameron is heading to Downing Street.

The new seat of Aberconwy, which is notionally held by Labour after boundary changes, is also a Tory target.

Labour will hope their voters turn out. After Welsh Secretary Peter Hain urged anti-Tory electors to vote "intelligently", they may also rely on supporters of other parties to back Labour in seats where the Tories could win.

Labour will also hope to win back Blaenau Gwent, which was one of their valley strongholds until it was won by the independent Dai Davies in 2005.

Plaid Cymru would like to retake Ynys Mon, which is held by their leader Ieuan Wyn Jones in the Welsh assembly. Plaid are also trying to take Llanelli from Labour, and Ceredigion from the Lib Dems.

At a UK level, Plaid will also be hoping for a hung parliament – or a balanced parliament as they put it – where they can team up with the SNP to gain concessions for Wales and Scotland from a minority government.

Lib Dems want to hold off the Tories in Montgomeryshire and Brecon and Radnorshire, and have also focused on Swansea West and Newport East.

A recent survey by YouGov suggested that 73% of the estimated 2.3m eligible adults in Wales intended to vote this time.